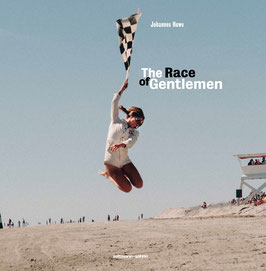 In the 1940s and 50s, hot rodders gathered along America’s shores to compete in beach sprints. The Oilers CC/MC Club has brought back „The Race of Gentlemen“ on the beach of Wildwood, New Jersey since 2011, reviving the legendary East Coast tradition.

There are loud engine noises coming off what looks like a cast-iron bathtub on wheels. It’s a 1934 Ford Hot Rod heading towards the beach in Wildwood, New Jersey.
Meanwhile, the rules of the race are being announced to the spectators and riders from a lifeguard tower. In order to participate in „The Race of Gentlemen“ (aka TROG), many have come from far and wide, bringing their pre-1935 American cars. These vintage cars are also restricted to replacement or add-on parts from the early 1950s at the latest. Meanwhile, the motorcycles all date from before 1947.

“The world as a picture” fascinates the artist; the gleaming chrome of the car lacquer, car races in salt deserts or the aesthetics of the daily life in New York. Huwe’s work lies between documentary-style precision and surreal staging. As in his last book “World of Speed” all photos were shot with a medium format Hasselblad camera.